The bus market is evolving rapidly. The pressing need for cities around the world to improve air quality, alongside commitments by many governments to address climate change, are powering efforts to deliver zero on-road emission city bus fleet solutions. Over the next decade, these efforts will see major cities increasingly refuse to purchase anything but zero emission buses, as they deliver on promised zero emission zones to protect the health of their citizens.

Bus technology will focus primarily on battery electric buses (BEV), with plug-in hybrids (PHEV) rapidly losing already low market shares, and the much hyped fuel cell powertrain (FCEV) remaining a small fraction of the market because they fail to offer the same total cost of ownership benefit as BEV.
The latest edition “Electric, Hybrid and Fuel Cell Buses 2021- 2040” offers our in-depth analysis of this evolving market, highlighting major developments over the past year, and presenting for the first time our extended outlook to 2040 for pure electric, plug-in hybrid and fuel cell buses.

China has led the world in bus electrification and will continue to do so over the next 20-years. However, as a result of the subsidy phase-outs and the increasing saturation of electric buses in Tier 1 cities, IDTechEx project the electric bus sales in China will stabilise at a lower level than during the subsidy boom years, after the biggest decline yet in 2020 from the COVID-19 pandemic. 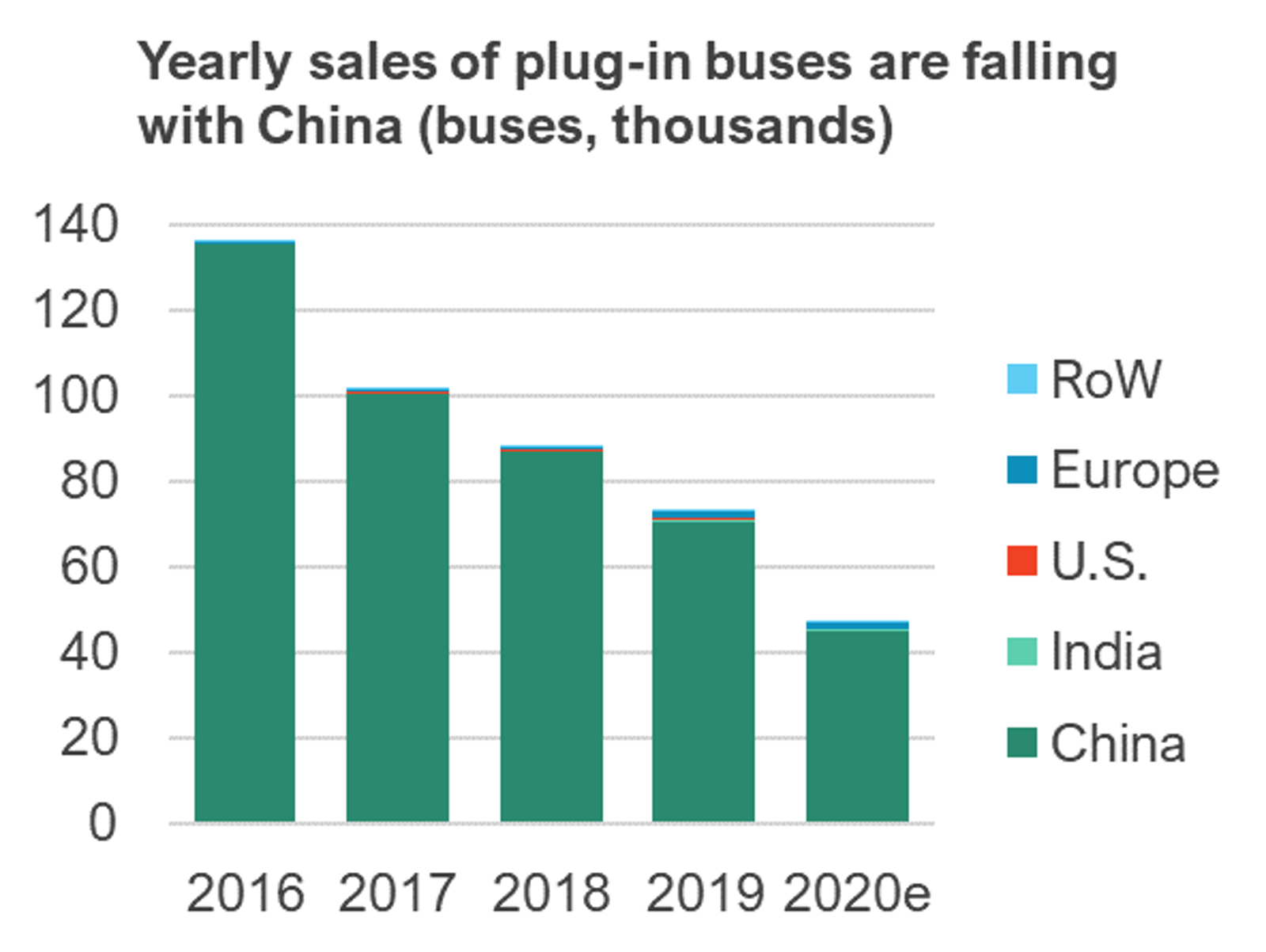 Whilst Chinese OEMs will no longer receive large subsidies in China (which have amounted to billions of dollars), the support has already established a world-beating cost base and technology, which is spreading to other countries. For example, Europe sold over 1800 electric buses in 2019, up from around 750 in 2018, with BYD and Yutong as key suppliers. As the Chinese electric bus market saturates, we expect to see an increased presence of Chinese bus OEMs in other bus markets around the world.

The 2019 Busworld conference in Belgium left in no doubt that several of the giants of the industry are still primarily promoting diesel buses, and consequently rapidly losing market share (for example former bus leader Daimler). The report details key innovations and future trends from the conference, which included a bus that parked sideways and two pure electric Chinese robot shuttles. Our interviews revealed some gantry charging, leading to batteries of one quarter the cost and size. This report majors on these new developments including successful sales of Chinese robot shuttles and buses sold with in-wheel motors, and Solaris and China rapidly gaining market share by selling the latest technology, value engineered.

In 2010, virtually all new buses had an internal combustion engine yet 20 years later they will be the minority. Why, and what are the implications for the value chain? Componentry, systems, and bodywork are being radically changed. In this report, technologies are carefully explained with pros and cons and IDTechEx’s bus technology timeline to 2040. The report includes a chapter devoted to the growing autonomous shuttle market; with increasing interest in autonomous passenger transport, the report offers profiles of current autonomous shuttle developers, explaining the design and future of small merged car / taxi / buses.