Electric ferries is an important contribution to reducing emissions. However, ferries may strain the power grid when charging and is hampered by standards that are not updated for new battery technology.

The background is a hybrid ferry is planned to replace the current marine gas oil (MGO) ferry that traffic the 3,4 km distance between Stornes (Hinnøy) and Bjørnerå (Grytøya) in Harstad municipality in the Northern part of Norway.

In the deliverable, Hafenstrom examined pros and cons based on different scenarios. The scenarios included direct charging from grid by cable, indirect charging by inductive means or using an onshore battery. These scenarios were further split into single charging (in both ports) and roundtrip charging (in just one port). Scenarios also took into consideration battery size and energy efficiency as well on-board fuel aggregators.

The grid is owned and operated by Hålogaland Kraft. HLK recently completed a study of the capability of the components to withstand the load at both high and low loading, as well as maintaining the voltage level within requirements. This study was essential to Hafenstrom in evaluating models suitable for planning e-ferry charging strategies.

The grid on Grytøya is especially vulnerable, since all energy is sent through a submarine cable connecting the island with the mainland. The regional distribution grid only carries 22 kV, making the island susceptible to power spikes when a ferry starts charging. In a report from DNV GL, it is stated that a pure e-ferry may be experience issues with reliability, since both quays are connected to the same distribution radial. 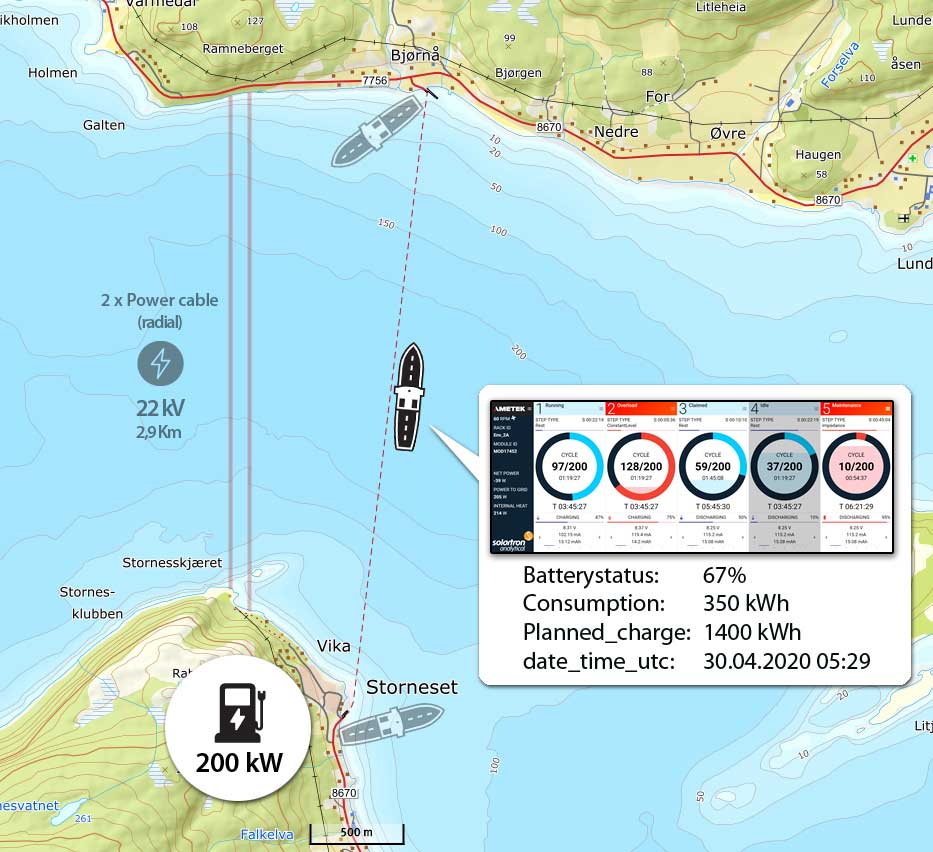 Considering the e-ferry would not be a direct part of the grid energy flexibility, charging would normally take place during loading/unloading. A battery buffer is planned to be placed in a substation near the port to support the grid during charging. However, the e-ferry will still be indirectly be part of the system, since charging Is planned to take place outside of the main load such during night time, outside of rush hour and at specific times.

In later articles we will examine some of the findings and their implications. Hafenstrom would like to extend their thanks to the other partners in the GIFT project and in particular Harstad municipality, NTNU and Hålogaland Kraft.