Skip to content
In their simplest form, an electric car consists of an energy storage device powering one electric traction motor, which spins wheels via a transmission. First invented in the 19th century, electric cars ultimately lost the battle to the internal combustion engine, unable to compete with the energy density of gasoline. Over one hundred years later, the Li-ion battery is enabling their meteoric rise as a solution for reducing local emissions and green-house gases.
Once derided as toys, today electric cars with barely 15 years of development offer cutting-edge automotive technology and performance, from sub 2.5 second 0 – 60mph acceleration, to autonomous driving functionality and solar bodywork. Battery-electric vehicles (BEV) are the endgame: zero emissions at point of use and the focus of automotive startups (and China). On the other hand, Plug-in Hybrid Electric Vehicles (PHEV) provide a short / mid-term solution, soothing initial fears of range anxiety; PHEVs tend to be the focus of incumbent automakers but are increasingly losing share to BEVs.
Strictly, ‘Electric Vehicle’ is an umbrella term and technology agnostic to the onboard energy storage device: Fuel Cell Electric Vehicles (FCEV), for example, are also ‘electric vehicles’ in addition to those powered by Li-ion batteries. Their future is discussed in the report, including why they will have a place in some car segments and in non-car categories, but ultimately will not be in mainstream cars.
The aim of this report is to cover the global electric car industry in detail, with a regional breakdown as well as insight into the underlying technologies enabling the transition. The report reveals current trends and the evolution of these technologies, with a view to their impact on the overall car market.
We summarise key sections of the report below.
Forecasts and COVID-19 Impact
In the report we provide long-term forecasts to 2040 for electric passenger cars by region (China, US, UK, France, Germany, Norway, Netherlands, Denmark, RoW) and by powertrain (battery-electric, plug-in hybrid, fuel-cell). Forecasts are presented in number of vehicles, battery demand (GWh) and market size ($ billion), with historic data back to 2015.
All forecasts are adjusted to reflect the impact of the global COVID-19 pandemic: amid economic uncertainty and unemployment, the auto industry has been one of the hardest hit as car purchases, typically the second largest consumer purchase (the first is a house), are now more difficult to justify for millions of consumers worldwide. 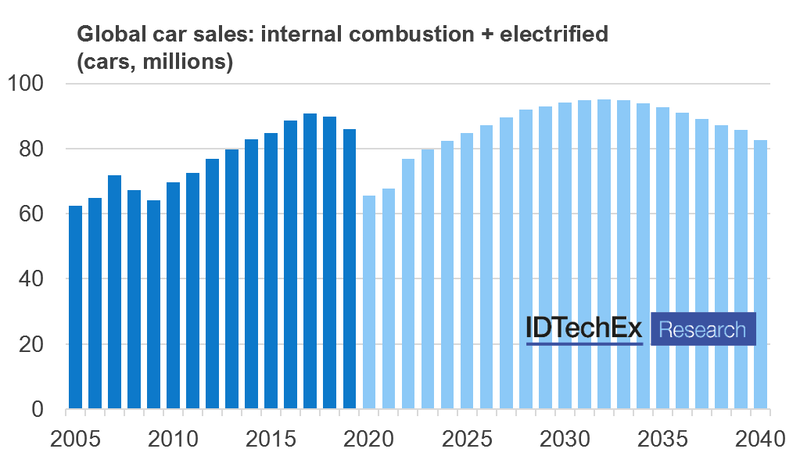 Li-ion Batteries
The report identifies and explains trends in Li-ion batteries for electric cars. For example, nickel content is increasing while cobalt content is decreasing: why is this important for automakers and the overall sustainability of the industry? We also provide historic market data on the Li-ion technology mix based on our database of electric cars in top automarkets: China has phased-out LFP from over half its car market to less than 2% today; why will Tesla contradict this and adopt LFP for Model 3 sales in China?
Electric Traction Motors
All electric motors have the same purpose of converting electrical energy to mechanical energy, but there are many types of motors that derive their names from their construction, principles of operation, or even from the control technique employed on them. In this report we explore why automakers are converging on permanent magnet motors, multiple motors, provide a benchmarking analysis of the different motor types and, finally, an outlook for how we expect the motor market to evolve over the next ten years.
Autonomous Vehicle Technology
We predict the rise of autonomous vehicles will have a profound impact on the global car market as it enables mobility-as-a-service to become cheaper than private-car ownership. The report shows forecasts of autonomous passenger car miles, revealing how this will lead to a fundamental peak-car scenario. We appraise the key underlying technologies such as LiDAR and camera-based systems: is the camera-only approach a high-risk gamble or a winning strategy that will be copied?
Source: www.idtechex.com