Skip to content
IDTechEx’s report “Fuel Cell Electric Vehicles 2022-2042” explores the current state of on-road fuel cell vehicle development for passenger car, light commercial vehicle, truck, and city bus markets. The report discusses the technical and economic aspects of fuel cell deployment in these different transport applications with IDTechEx’s independent outlook for the future of fuel cell vehicles to 2042.
In response to the threat posed by climate change and poor urban air quality many countries are tightening emissions regulation to reduce the impact from on-road transportation. This legislation is forcing automotive OEMs away from traditional combustion engines and toward all-electric and fuel cell electric powertrains.
Whilst the market for pure battery-electric vehicles (BEV) is beginning to take-off in many transport segments, the energy density limits of lithium-ion batteries means that the range of battery electric vehicles is restricted by both the maximum weight of batteries that can be carried by a vehicle and the available space for batteries within that vehicle. Fuel cell technologies offer automakers an avenue to greater vehicle range, whilst still delivering the crucial reduction in on-road exhaust emissions.
Utilising a fuel cell, which generates electricity through a chemical reaction between hydrogen (stored as fuel in pressurised tanks) and oxygen (from purified intake air), fuel cell systems can deliver a greater energy density than current battery electric powertrains. This improved energy density enables greater vehicle range between fuelling than can be delivered by battery electric vehicles.
A further significant benefit of fuel cell systems is that the refuelling of hydrogen tanks is similar to refuelling conventional combustion engine vehicles (a few minutes) and is considerably faster than comparatively slow electric charging, which can take several hours. The range and refuelling advantage of FCEV could be particularly critical for the viability of zero-emission heavy-duty truck and bus operations, where there is a high daily range requirement, long operating hours, and the need for operational flexibility.
Fuel Cell Passenger Cars
The deployment of fuel cells within vehicles is not a new concept. Major OEMs including Toyota, Ford, Honda, GM, Hyundai, Volkswagen, Daimler, and BMW have invested large sums over the past 30-years in advancing the technology. For passenger cars, a huge amount of effort and expense has gone into developing fuel cells, but the culmination of these efforts is the reality that in 2021 only two major OEMs, Toyota and Hyundai, have FCEV cars in production and fewer than 10,000 FCEV were sold in 2020. Battery electric vehicles, whose development began in earnest at a similar time to FCEV, sold more than 3 million units in 2020. 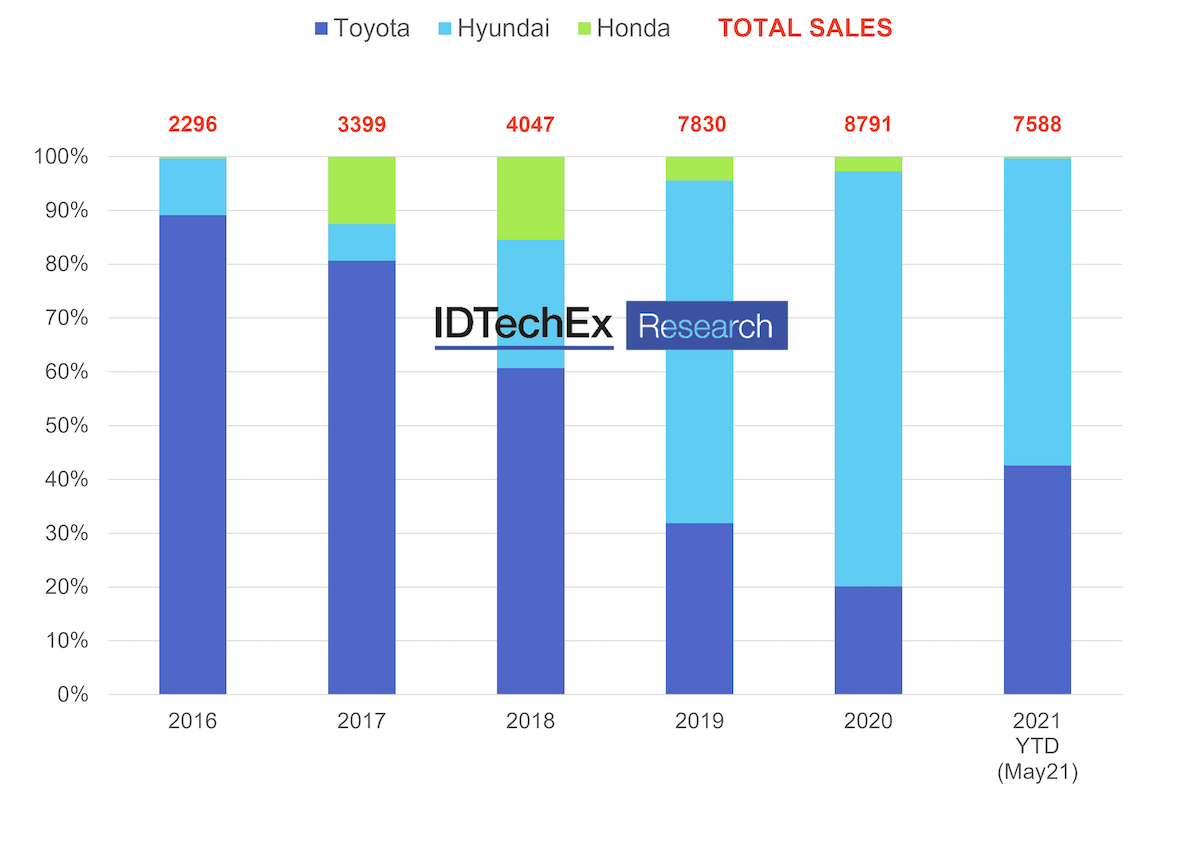 Hydrogen Generation
Fuel cell vehicle deployment faces considerable challenges, including decreasing the cost of fuel cell system components to reduce the upfront cost of fuel cell vehicles, and rolling out sufficient hydrogen refuelling infrastructure to make driving a FCEV workable. Also essential will be the availability of cheap ‘green’ hydrogen, produced by the electrolysis of water using renewable electricity, which analysis in the new IDTechEx report highlights will be vital to FCEVs delivering the environmental credentials on which they are being sold.
The most developed, cheapest, and scalable method currently available for hydrogen generation is steam methane (natural gas) reforming. H2 produced by this method is known as “grey hydrogen”. This process however produces a significant volume of CO2, meaning the well-to-wheel carbon footprint of FCEV using grey hydrogen would offer a very limited emission reduction potential over modern combustion engine vehicles. This IDTechEx report looks at carbon capture and storage (CCS) technologies, which will be required to greatly reduce the carbon emission from SMR, to produce so called “blue hydrogen”. CCS has yet to be demonstrated a scale, though is attracting considerable interest from major energy firms. The ideal pathway would be to generate “green hydrogen” using electricity from renewable sources including wind, solar and hydro, splitting water into hydrogen and oxygen through electrolysis, however, the cost effectiveness of this method therefore depends on utilising cheap renewable electricity, which is not yet widely available. 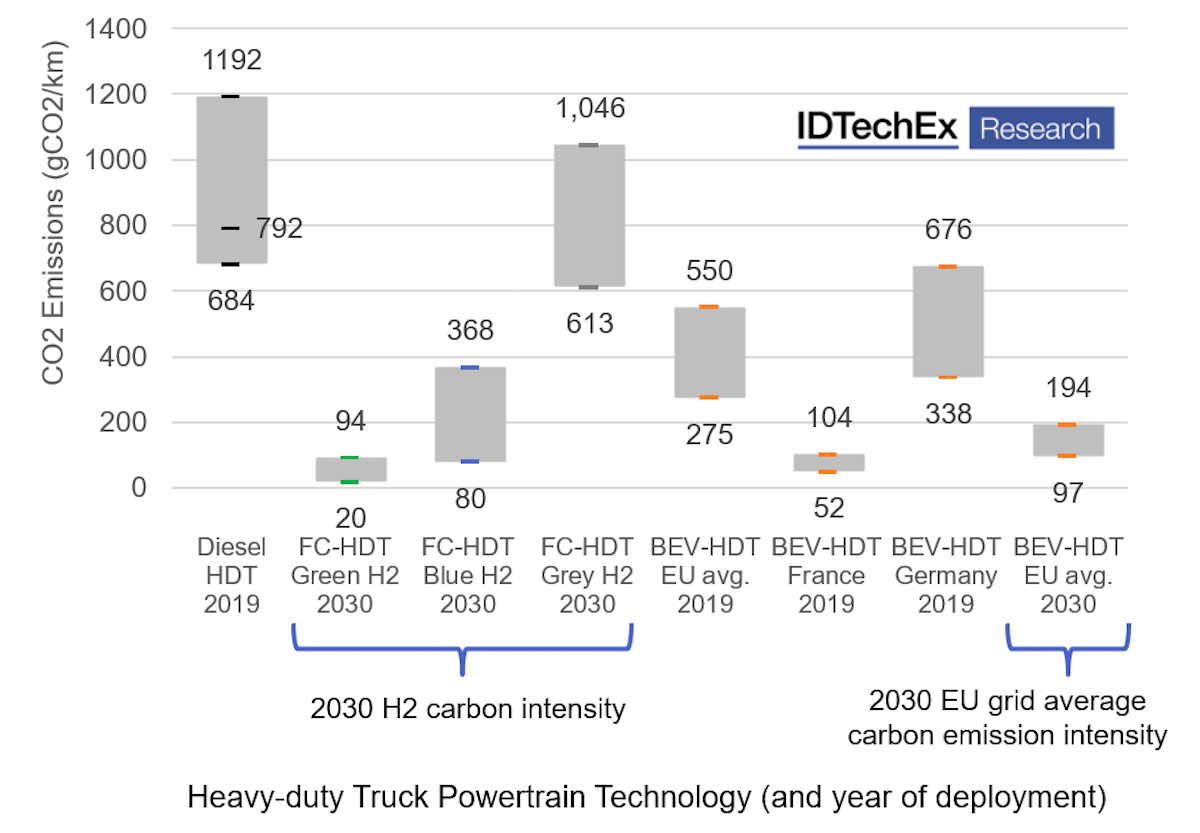 Whilst the challenges facing fuel cell vehicles are considerable, many governments around the world are now offering an unprecedented level of support for the development of zero-emission vehicles, with several major economies including Japan, Korea, Germany and China backing efforts for an extensive transformation away from fossil fuels to a wider hydrogen economy. With the backing of governments, increasing interest from large multinational energy firms who have recognised they need a strategy to transition to cleaner fuels, and strong commitment being shown by several major OEMs (though chiefly Toyota and Hyundai), there is currently a clear concerted effort to push FCEV development and deployment.
Fuel Cell Trucks and Buses
Of particular focus in the IDTechEx report are the heavy-duty truck and bus markets, which operate demanding applications that require long daily range, have constrained refuelling time availability, and require operational flexibility. Whilst this segment of the automotive industry is also facing tightening legislative requirements to reduce exhaust emissions, BEV solutions are potentially less feasible in these applications, with the weight and cost of the lithium-ion battery required to deliver the daily-duty cycle prohibitive. These applications therefore offer a market segment where fuel cell vehicles could offer the only viable zero-emission solution. The new report looks in detail at the challenge of employing fuel cell commercial vehicles, including CAPEX costs, the influence of H2 fuel cost on viability, and examples from current FCEV deployments.
This report and it’s granular market forecasts will be of interest to companies across the automotive value chain: fuel cell and electrolyser manufacturers, battery and electric motor manufacturers, hydrogen refuelling infrastructure developers, parts and systems suppliers, along with companies in the energy sector, government agencies, research organisations, and companies or individuals looking to invest in a technology that has the potential to be a vital element in efforts to decarbonise the transportation sector.