1. Introduction
This is a description of the content and results of the work in the Glider project in 2018 and plans for 2019.
During the period March-September 2018, the three unmanned vessels Sailbuoy, Seaglider and Waveglider were in operation outside Lofoten and Vesterålen. We describe the cruise, the sensors on board and what data was collected. The three sliders are extremely energy-rich, and benefit from waves, wind and sunshine for the propulsion.

The batteries for Sailbuoy and Waveglider are continuously charged by solar panels, and they can be out for several months in a row. The diving Seaglider can be out for 2 to 3 months before the battery needs to be replaced. The sliders keep an average speed of about 1 to 3 knots depending on the weather and wind. 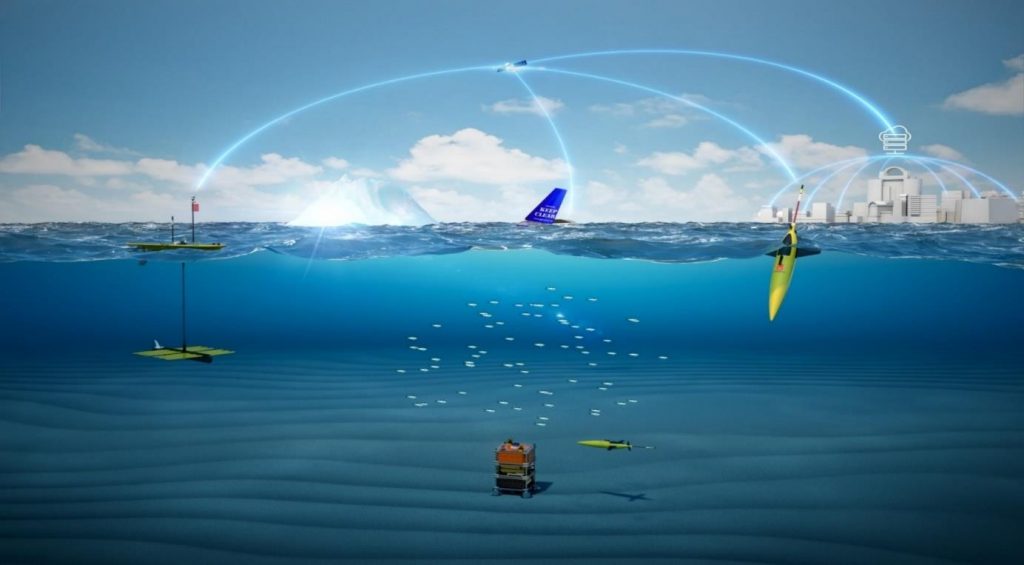 2. Organization and financing
The Glider project (2017-2019) is funded by the Research Council’s DEMO2000 program and ConocoPhillips. The project has been developed and led by Akvaplan-niva AS in Tromsø. Partners are Kongsberg Maritime and Kongsberg Digital, NORCE, Offshore Sensing, Aanderaa, Maritime Robotics, Norwegian Institute for Water Research, the Meteorological Institute, UiT Norway’s Arctic University and North University.

3. Completed expeditions in 2018
All three sliders were put out in the sea outside Bodø in early March. It was pre-set up routes that the three sliders should follow. At the same time, there was always communication via satellite so that the course could change, and one could also change the frequency of collections and data transfer to land. The sliders’ position and status of the battery and sensors were transferred continuously to the PCs of the pilots for each platform.

Most of the data (see more detailed below) was transmitted in near real time, quality assured and stored in the database. Data collected with the sonar EK80 and hydrophone has such a large volume that these data types cannot be transmitted in their entirety in real time via satellite. Some of the data is transmitted directly, but most are stored on board and physically retrieved by inspection or service during the voyage. Here, development is underway for processing on board, and then processed data can be transferred to land in real time, while raw data is downloaded at the end of the voyage.

Figure 2 shows the operating area of ​​the three sliders in 2018. During the cruise, Sailbuoy sailed 4898 km, Waveglider 3550 km and Seaglider lagged a distance of 2800 km and completed 1354 dives. Total distance traveled for all three slides was over 11,000 km. 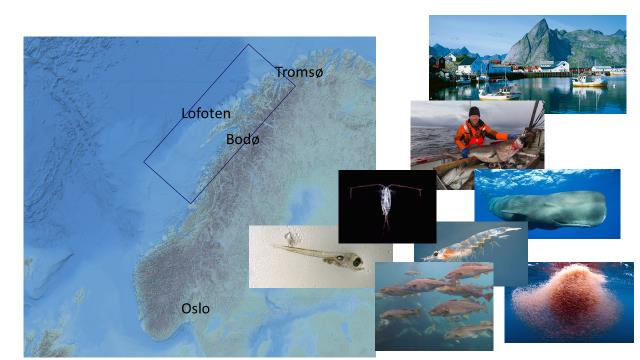 Figure 3 shows the route to the three vessels together with an overview of different meeting points with other projects and research vessels with the purpose of calibrating and comparing data capture. 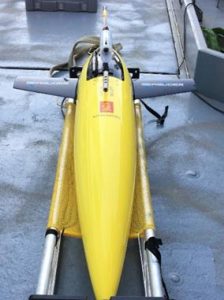 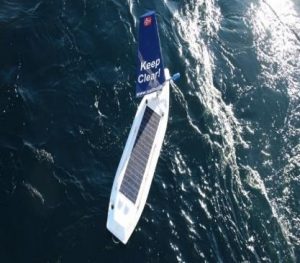 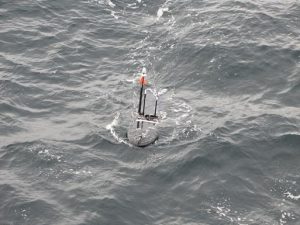 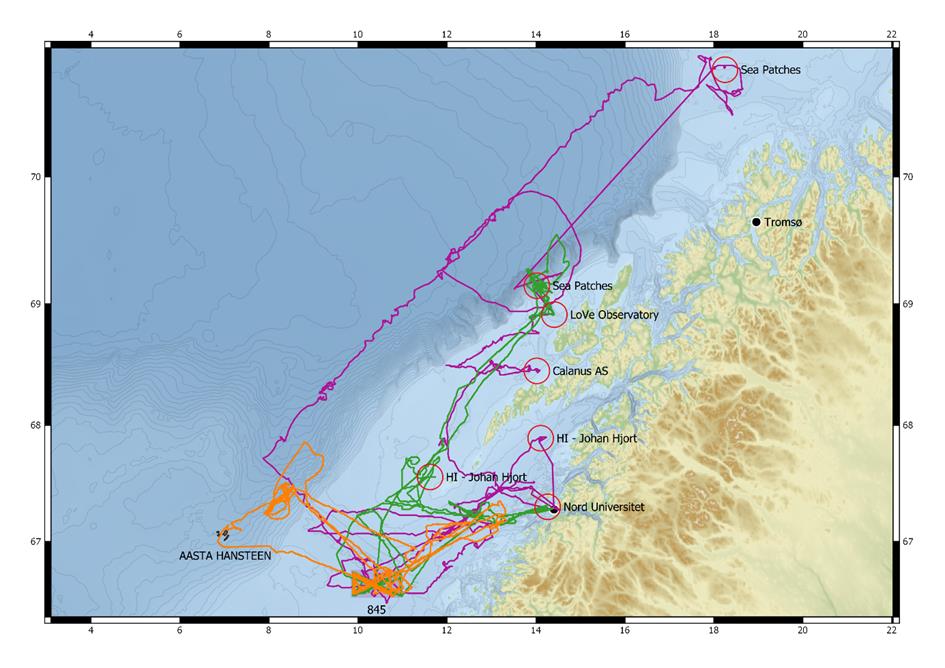 4. Data collected
The main conclusion from the 5-6 months that the sliders were out at sea in 2018 is that both platforms and sensors worked well and collected large amounts of data. The following types of data were collected:
Meteorology (temperature, air pressure, wind speed and direction)
Oceanography (temperature, salinity, oxygen and turbidity, ocean currents, strength and direction), Biology (phytoplankton, zooplankton, fish and marine mammals).
Figure 4-6 illustrates examples of collected data. 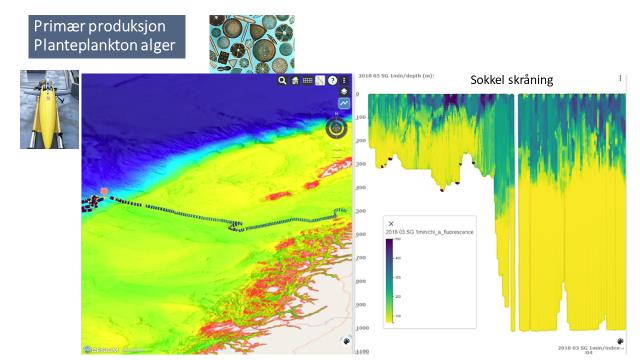 Figure 4: Biomass of phytoplankton on the sock (approx. 200-300 m deep) from Bodø to the shelf slope measured with the diving Seaglider. It appears that phytoplankton is drawn down to a depth of 400-500 m at the base of the base.

Figure 5. Animal plankton along the line Bodø to Vesterålen measured with the sonar Simrad EK80 placed on a Sailbuoy. Shows large amounts of calanus from the surface and down to 30-40 m. 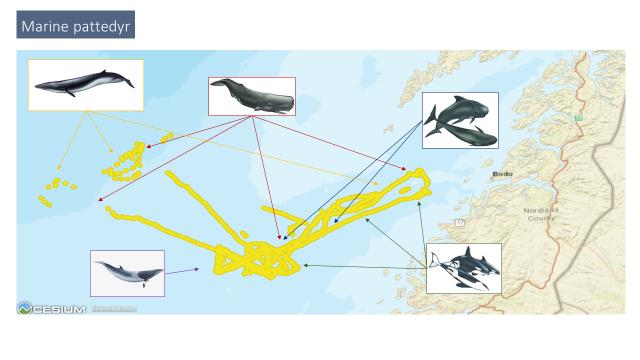 All collected data is quality assured and stored in the Glider database using Kongsberg Kognifai. The data material is available to the project participants via the web portal Enlighten and can be produced visually from vessel, time, geographical location and depth, and theme. Enlighten also provides the basis for analyzing collected data and making these available to potential users in the desired format and for different purposes.

5. Plans for 2019
A key task in 2019 will be the processing and analysis of measurement series collected in 2017 and 2018. This includes large amounts of data within a number of disciplines. The data material will be processed by experts in the Glider project in collaboration with external partners nationally and internationally. In some areas, data sets have been collected that are completely unique.

This applies, among other things, to information on oceanography and biology in the upper 20 m. With instruments mounted on ships, one will largely not get such information collected in a good way. Marine production of carbon (phytoplankton) depends on light, and the upper water layers are therefore central. Animal zooplankton and fish fry will be where there is optimal food access. With sensors placed on the sliders, we can make recordings from the sea surface and down, and sliders are silent and without light so that marine life is not disturbed.

With the use of sliders, it is therefore possible for the first time to measure the biological activity of the upper water layers in an efficient manner. A combination of ships and sliders will thus be a good and economically advantageous solution. However, as of today, we are unable to distinguish between rat and other zooplankton or between different fish juveniles in an effective way. This will be a key objective in the further work in 2019.

In addition to the financing of the Glider project itself (from DEMO2000 and ConocoPhillips), it has succeeded in obtaining financial support for several field activities in 2019. This makes it possible to have a more aggressive field program where the work from 2017 and 2018 in meteorology, oceanography and biology can be continued. The equipment portfolio for the 2019 activity includes a Sailbuoy with the sonar EK80. In addition, a Seaglider for measuring ocean currents on the base and slope, and passive acoustics. Furthermore, a wave glider with EK80, oceanography, meteorology, passive acoustics, turbidity and plant plankton.

The field activity for field activity in 2019 is planned to be from the end of April and about one month ahead.
Central to 2019 is a 4-week cruise in the LoVe area in collaboration with the Norwegian-Chinese NFR project STRESSOR. The project, led by UiT, has Akvaplan-niva and several participants in Gliderpros projects with as Norwegian partners. In addition, with funding from Regional Research Fund (RFF Vest), we will test the power meter ADCP on Sailbuoy.

This work is led by Aanderaa and has several players from the Glider project as partners. The 2019 activity also includes a separate project for analyzing collected data from 2018 on marine mammals. This project is funded by VISTA (Norwegian Academy of Sciences) and is led by the University of Oslo. The aim of the project is to be able to find the exact position and movements of marine mammals using data from the hydrophone placed on the sliders.