Skip to content
Service robots are becoming increasingly popular. This report provides a comprehensive analysis of the major application areas of service robots, including delivery and logistics robots, cleaning and disinfection robots, social robots, agricultural robots, kitchen and restaurant robots, and underwater robots. It covers key technologies, market analysis, and 10-year granular regional market forecasts. The report provides an understanding of the market dynamics, competitive landscape, market outlook, and promising applications.
Robots have the potential to revolutionize so many aspects of the modern world, from optimizing industrial efficiency to improving our everyday lives. Unlike the traditional robots used in industrial applications, service robots are primarily designed to support people in their daily life. As a broad definition, service robot covers a wide range of applications and types of robots, ranging from logistics and delivery robots, social robots, cleaning robots, disinfection robots, robotic chefs/kitchen robots, robotic waiters/restaurant robots, agricultural robots, and underwater robots. While the service robot market is at a much earlier stage of development than the traditional industrial robots, there is increasing effort within this space to promote the adoption of service robots. The intensity of competition and stage of development varies significantly depending on the application. IDTechEx’s latest report on “Service Robots 2022-2032” takes a deep dive into the applications mentioned above with an analysis of the technologies, players, and markets with granular forecasts for the next 10 years. 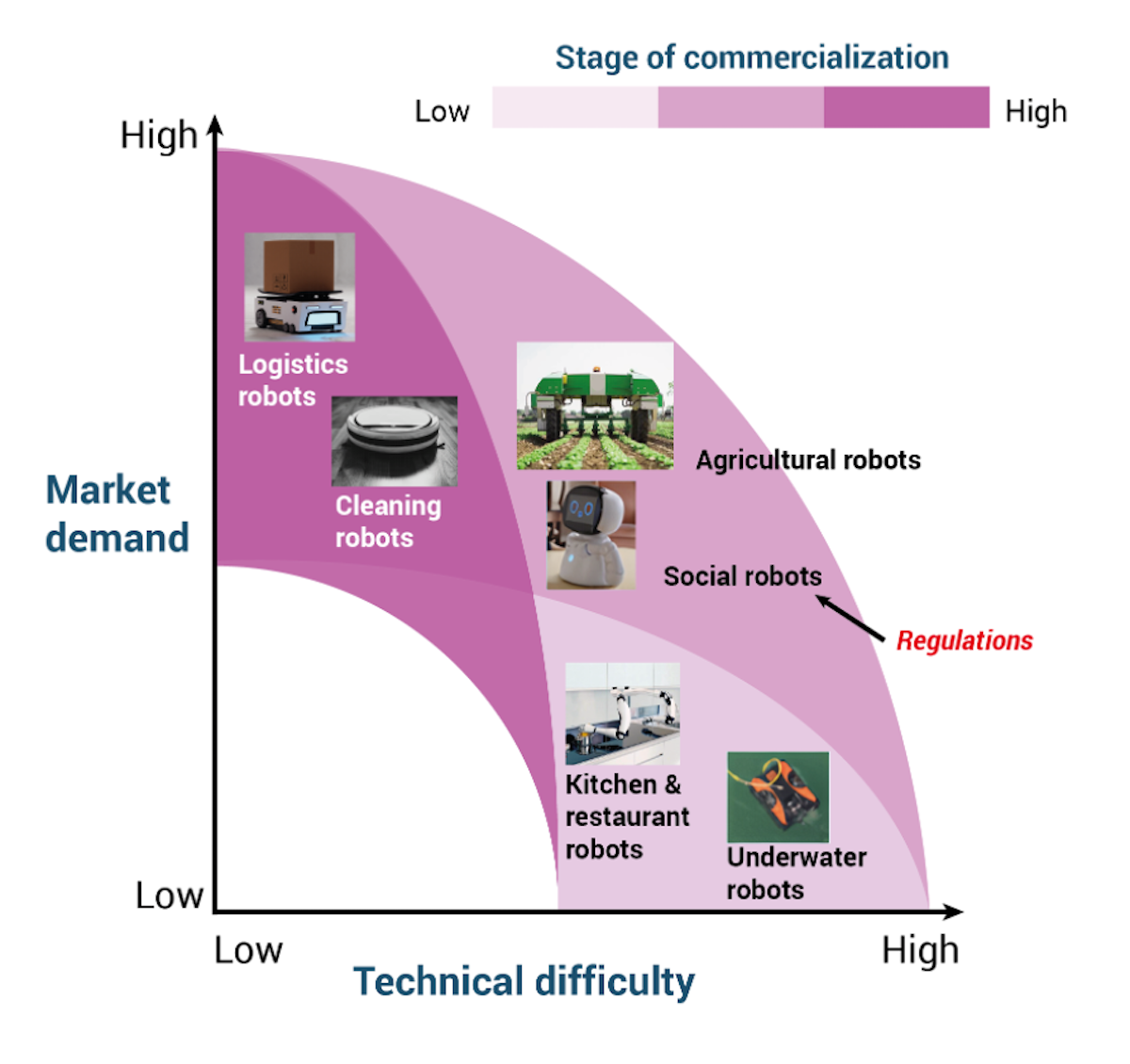 Robots categorized by their technical difficulty, market demand, and stage of commercialization. Source: IDTechEx
Service robots in delivery and logistics
Automation in the warehousing and logistics chain is a fast-growing market. A particularly exciting subset of this is the use of mobile robots, autonomous vehicles, and drones, for the automation of movement-based tasks. This field encompasses all manner of mobile robotic devices used in logistics, such as robotic carts/vehicles, on-road autonomous trucks, and drones, which help goods in their journey from origin to destination. Thanks to the relatively low technical complexity and massive demand market, logistics and delivery robots have a promising future. As one of the dominant applications of service robots, they are expected to have a CAGR of 21% in the upcoming decade.
Cleaning and disinfection robots
As the second-largest application, cleaning and disinfection robots can be classified as either domestic cleaning robots or professional cleaning robots. Based on the cleaning approaches, they can also be classified as physical cleaning (using brushes) or non-physical cleaning (using sprays and/or UV lights). Driven by COVID, cleaning robots have gained lots of momentum and funding (especially for start-ups) during the past two years, particularly in their professional applications. IDTechEx expects to see a fast growth of professional cleaning robots in the upcoming decade.
Social robots
Social robots are essentially high-level artificial intelligence (AI) systems built into physical entities. The major application areas of social robots include hospitality and medical treatments. Social robots can be used to guide and provide information. Typical places we could find social robots would be airports and hotel foyers. Aside from the hospitality industry, another important application for social robots is treating people who suffer from cognitive impairment (e.g., autism), robots can be used to replace traditional physiotherapists and provide emotional and educational support. However, the emotional feedback causes debate as robots are not meant to have emotions, and the conversation is linked with multiple regulations and ethical issues.
Agricultural robots
Agricultural robots are an emerging application of service robots. Unlike logistics and delivery robots that primarily work in a relatively well-controlled environment and social robots that primarily work indoors, agricultural robots typically work in rural farmlands with limited access to infrastructure, difficult terrain, and unpredictable weather. These environmental factors bring a number of technical challenges to agricultural robots. Meanwhile, the agricultural industry is a low-margin industry so the high upfront costs of the agricultural robot could be another barrier to market uptake.
Restaurant and kitchen robots (robotic waiters and robotic chefs)
Restaurant robots (commonly known as robotic waiters) and kitchen robots (commonly known as robotic chefs) have gained lots of attention during the past two years due to the impact of COVID. Restaurant and kitchen robots can help restaurant owners better manage the food preparation such as maintaining stable food quality, reducing food waste, taking less space, etc. Despite these advantages, there are also several drawbacks. For instance, kitchen robots/robotic chefs are typically expensive (more than $200,000 per unit according to one of the commercialized products). The food service industry has high competition with thin profit margins; therefore, many restaurant owners are reluctant/unable to make such a big upfront investment, which presents a significant barrier to market uptake. However, given the massive potential of restaurant and kitchen robots, IDTechEx does see a number of market entry opportunities in the highly standardized fast-food industry.
Underwater robots (unmanned underwater vehicles)
Underwater robots, also commonly known as unmanned underwater vehicles (UUV) are primarily used for military applications. Examples include submarines and countermining robots, among others. Underwater robots have huge potential: they can be used for research and exploration, dam/tunnel/pipeline inspection, and several other applications. This report primarily focuses on the civil applications of underwater robots, and there are several technical and commercial hurdles. From a technical point of view, the harsh underwater environments come with limited visibility, unpredictable animal attack, and limited approaches for communication. In order to deal with these technical challenges, a number of sensors, infrastructures, and navigation technologies are needed, such as sonar, acoustic altimeters, pressure sensors, cameras, and inclinometers. These sensors and technologies lead to high manufacturing costs, which concomitantly leads to a high price for underwater robots. Despite the significant hurdles, IDTechEx expects the uptake of underwater robots to increase significantly over the coming decade. 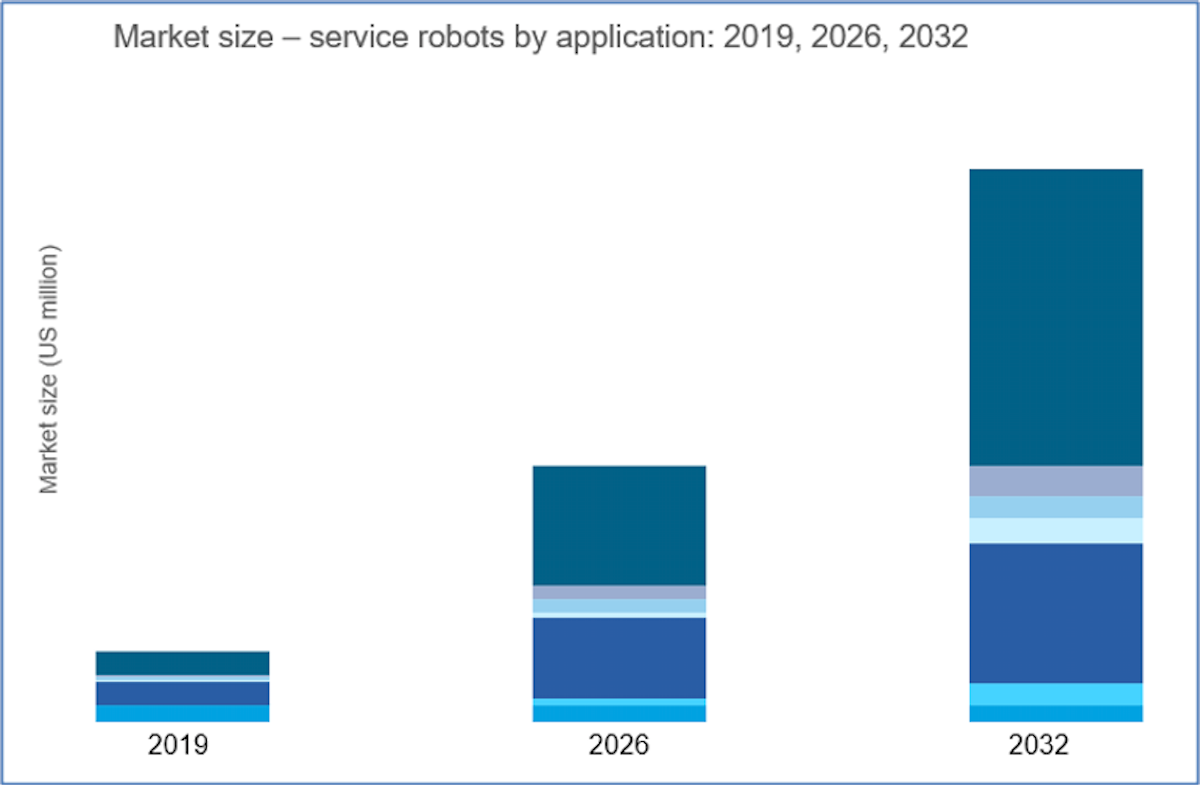