Skip to content
Growth in global energy consumption has caused CO2 and GHG emissions to rise, in turn causing an increase in average global temperatures. The combustion of fossil fuels including coal, oil, and natural gas, has been a key driver behind this, providing the underlying driver for the production and use of non-fossil alternative fuels that can help reduce emissions and mitigate against climate change.
The electrical power and transportation sectors have been first to implement renewable technologies. For electricity generation, renewable power sources such as wind and solar PV are the fastest growing energy source for many regions worldwide, reducing the carbon intensity of electricity production. In on-road transportation, the 2020s are forecast to be the decade where battery electric cars and other personal transport modes become cheaper, on both a lifetime- and upfront-cost basis, than their internal combustion engine counterparts.
This will lead to widespread battery electric vehicle adoption. However, combined, electricity and on-road transportation account for less than 50% of global energy consumption and CO2 -e emissions. Sectors including heavy industry, heating, aviation, and shipping are far more difficult to decarbonise. Here, direct electrification or use of battery technology is unlikely to provide a solution.
Liquid and gaseous fuels will therefore be necessary in these sectors. Renewable diesel or HVO (hydrotreated vegetable oil) for example is set for a decade of growth. Production of renewable diesel differs from conventional biodiesel, allowing it to be used as a drop-in fuel, where biodiesel will have to be blended.
Further, if waste feedstocks are used, such as used cooking oil or animal fats, renewable diesel can offer significant CO2 emissions reductions and be classified as a 2nd generation or advanced biofuel. Growth in the fuel is driven by the US and Europe and emissions targets set in these regions with the report providing data on players and productions volumes and a capacity forecast (MMGY) through to 2031. This despite the backdrop of vehicle electrification.
While transport electrification will erode demand for alternative fuels in road transport, sustainable aviation fuels (SAF) are likely to be necessary for the aviation industry to reduce emissions. Despite Covid-19 significantly reducing demand for air travel, there were several announcements, including purchase agreements, made in 2020 that highlighted greater emphasis on the decarbonisation of aviation through use of SAFs.
As of the end of 2020, there were 7 SAF production processes certified by the International Air Transport Association, which can be blended with conventional jet-fuel at various percentages. The most prominent SAF is based on hydroprocessed esters and fatty acids, produced in a process similar to renewable diesel. IDTechEx estimate that demand for SAF in 2020 accounted for <0.1% of total jet-fuel demand and despite significant growth expected from the market, demand in 2026 is forecast to still account for <1%. 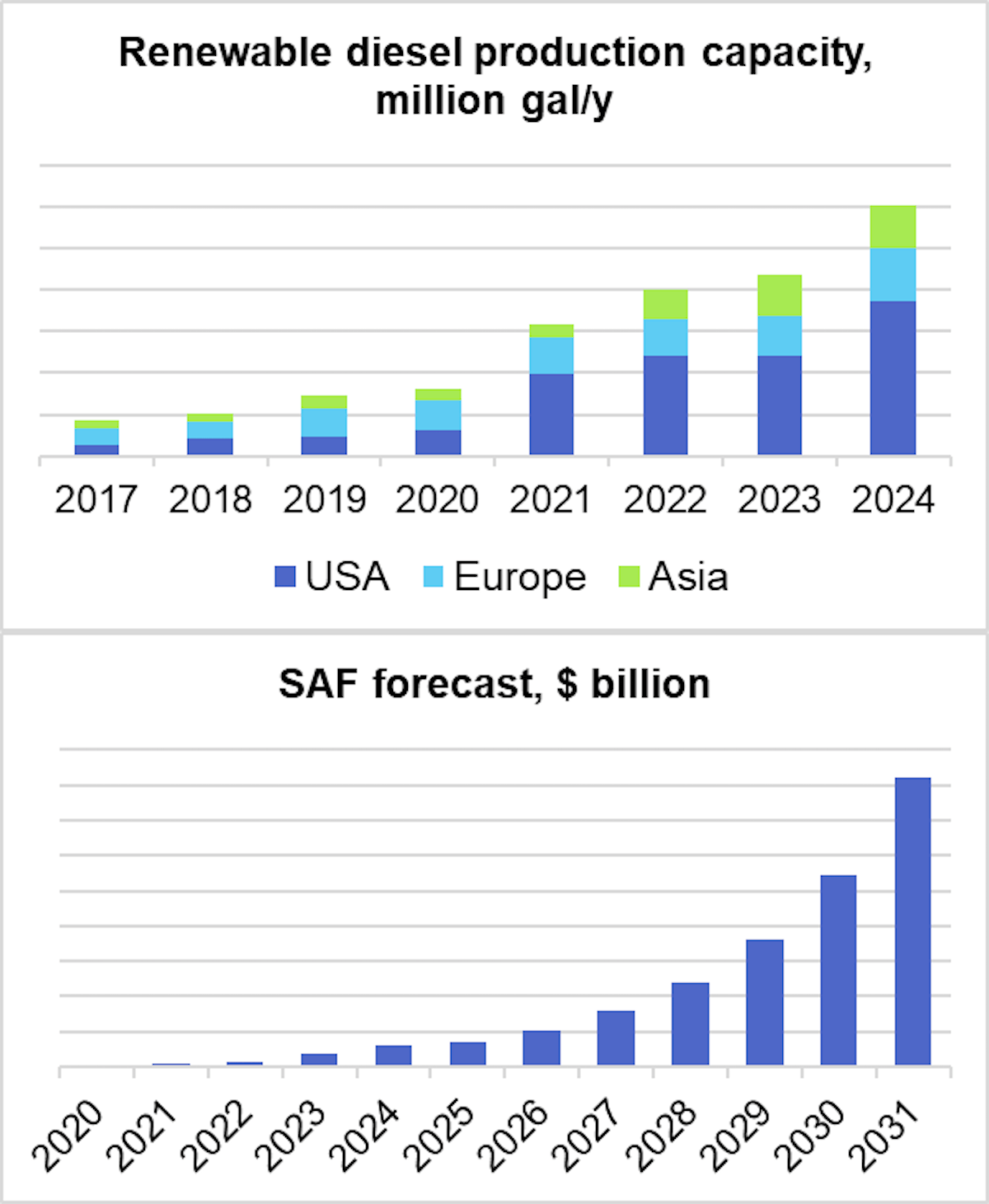 While SAF production is currently bio-based, electro-fuels (e-fuels) could play an important role in the future for the aviation sector, in addition to providing a route to producing other drop-in fuels and feedstocks, including methane, methanol, and syngas. E-fuels make use of electrolytic hydrogen and atmospheric carbon, whether captured directly from the air or from an industrial point source.
As such, they negate some of the concerns with biofuels, such as feedstock availability, land use changes or potential competition with food cultivation. However, the e-fuel market is at a much earlier stage of development and electrolyser technology, a central part of e-fuel production, is likely to need further improvement and demonstration at scale to fully realise the potential of e-fuels. Cheap electrical power will also be a pre-requisite for economical production of e-fuels. The report covers the various routes that can be taken to produce e-fuels, and details the companies involved and seeking to commercialise and expand their e-fuel technologies and production capacity.
Green ammonia (e-ammonia), produced from electrolytic hydrogen and nitrogen from the air, has been touted as being a promising hydrogen carrier for the hydrogen economy, due its higher temperature at which it liquefies, making it more energy dense than hydrogen, and easier to store and transport. The maritime industry in particular could be well placed to utilise ammonia as a fuel and while there is seemingly interest in it, use of ammonia as a fuel in maritime is currently limited to a very small number of projects.
Projects are also underway to test the feasibility of green ammonia as a form of energy storage, with ammonia produced at times of low electricity cost (or high renewable output), stored, and power generated at times of high electricity demand. Direct use of ammonia, in a gas turbine, engine or potentially fuel cell, will have to be carefully controlled and monitored to ensure low levels of NOx emissions. While use of ammonia as a fuel or energy vector is still at the early stages of commercialisation, production of green ammonia will be important in its own right, with the chemical being used globally as a fertilizer and current production generally reliant on the use of natural gas as a feedstock.
An alternative to ammonia for shipping could be biogas or bio-LNG (liquefied natural gas), which could also play a key role in stabilising electricity grids with high levels of renewables and in decarbonising heat demand. Biogas could benefit from the fact that hundreds of tankers already make use of LNG, such that biogas presents the possibility for a smoother transition to carbon-neutrality, where ammonia would require new ships and retrofits.
IDTechEx’s report on non-fossil alternative fuels covers a wide scope of fuels, processes and sectors, and aims to provide insight on the state of the market for alternative fuels, how they fit in to a low-carbon economy, the key players and developments. The report includes an introduction to biofuels with further detailed sections on renewable diesel, advanced biofuels, sustainable aviation fuels, electro-fuels (e-fuels), and e-ammonia, providing data, trends, analysis and discussion on technology development, production volumes, company announcements, and targeted applications and sectors.
Source: www.idtechex.com