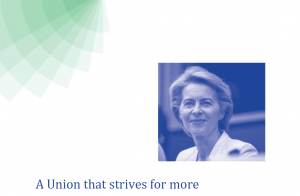 Ms Ursula von der Leyen, the new President of the European Commission, presented on 16 July before the European Parliament in Strasbourg her political guidelines for the mandate of the next European Commission.
With these guidelines, Ms von der Leyen sets her vision and action plan for a political partnership and an interinstitutional dialogue on the Union’s priorities for the next five years.

The people of Europe made their voice and their aspirations heard in record numbers at this year’s European Parliament elections. They presented Europe’s institutions and leaders with a clear task to be bold and to be decisive.
To match this aspiration with action, we must rediscover our unity and inner strength.

If elected, I will strengthen the links between people, nations and institutions. Between expectations and delivery. Between words and deeds. My Commission will listen to the people of Europe and be bold where it makes sense for us to act, leaving national, regional and local actors to deliver where they are best placed to do so.

Today’s world feels ever more unsettled. Existing powers are going down new paths alone. New powers are emerging and consolidating. Changes in climate, technology and demography are transforming our societies and way of life. This has left a feeling of unease and anxiety in many communities across Europe.
In the next five years, we have to work together to allay fears and create opportunities.

Europe must lead the transition to a healthy planet and a new digital world. But it can only do so by bringing people together and upgrading our unique social market economy to fit today’s new ambitions.
As we embark on this journey, we must make the most of all of our strengths, talent and potential. We must focus on equality and creating chances for all, whether for women or men, whether from East, West, South or North, whether young or old.

We must defend our common values and uphold the rule of law. And we must give ourselves the resources we need to achieve our ambitions, notably through our next long-term budget which should be agreed as swiftly as possible.
We have the foundation from which to achieve all of this. We have record high employment and sustained economic growth. We are the world’s trading superpower. We set standards that others follow. We have moved out of the era of crisis management and can now look forward.

We should not be shy about being proud of where we are or ambitious about where we want to go.
As we move forward together, I want a more inclusive and open approach to the way we work. I want to strengthen the Commission’s partnership with the European Parliament, the voice of citizens.
In this spirit, I have consulted far and wide and have inspired myself from my discussions with the political groups in the European Parliament, as well as from the European Council’s Strategic Agenda for 2019-2024.

These Political Guidelines draw on the common ideas and priorities that unite us. They are not an exhaustive work programme but rather aim to frame our common work. Within each chapter you will find the policies I intend to use to help us deliver on our goals. The Political Guidelines focus on six headline ambitions for Europe over the next five years and well beyond:

1. A European Green Deal
2. An economy that works for people
3. A Europe fit for the digital age
4. Protecting our European way of life
5. A stronger Europe in the world
6. A new push for European democracy

We will adapt and update as challenges and opportunities inevitably emerge, but we will always stick to the principles and the aspirations outlined in these guidelines. I see the next five years as an opportunity for Europe – to strive for more at home in order to lead in the world.

More can be read here: PDF