Skip to content
The rapidly growing electric vehicle market puts a huge demand on electric motors across several global regions and different vehicle categories. Within this market, we are seeing trends around motor technology and topology, power and torque density, materials utilisation and thermal management. This report addresses these trends within the markets for battery-electric or hybrid cars, vans, trucks, buses and two-wheelers with OEM use-cases, benchmarking and granular market forecasts.
Electric motors truly are the driving force behind electric vehicles (EVs). In addition to the batteries and power electronics, the electric motor is a critical component within the drivetrain. Despite electric traction motors originally being developed in the 1800s, the market is still evolving today with new designs, improving power and torque density and more considerations around the materials used. These aren’t just incremental improvements either with developments such as axial flux motors and various OEMs eliminating rare-earths altogether.
The latest report from IDTechEx on Electric Vehicle Motors 2022-2032 details OEM strategies, trends and emerging technologies within the motor market for EVs. An extensive model database of over 250 EV models sold between 2015-2020 in several geographic regions aids in a granular market analysis of motor type, performance, thermal management and market shares. Technologies and strategies of major OEMs are considered for cars, two-wheelers, light commercial vehicles (vans), trucks and buses along with several use-cases and benchmarking of several motor units. Emerging technologies are also addressed with market forecasts through to 2032 such as axial flux and in-wheel motors. 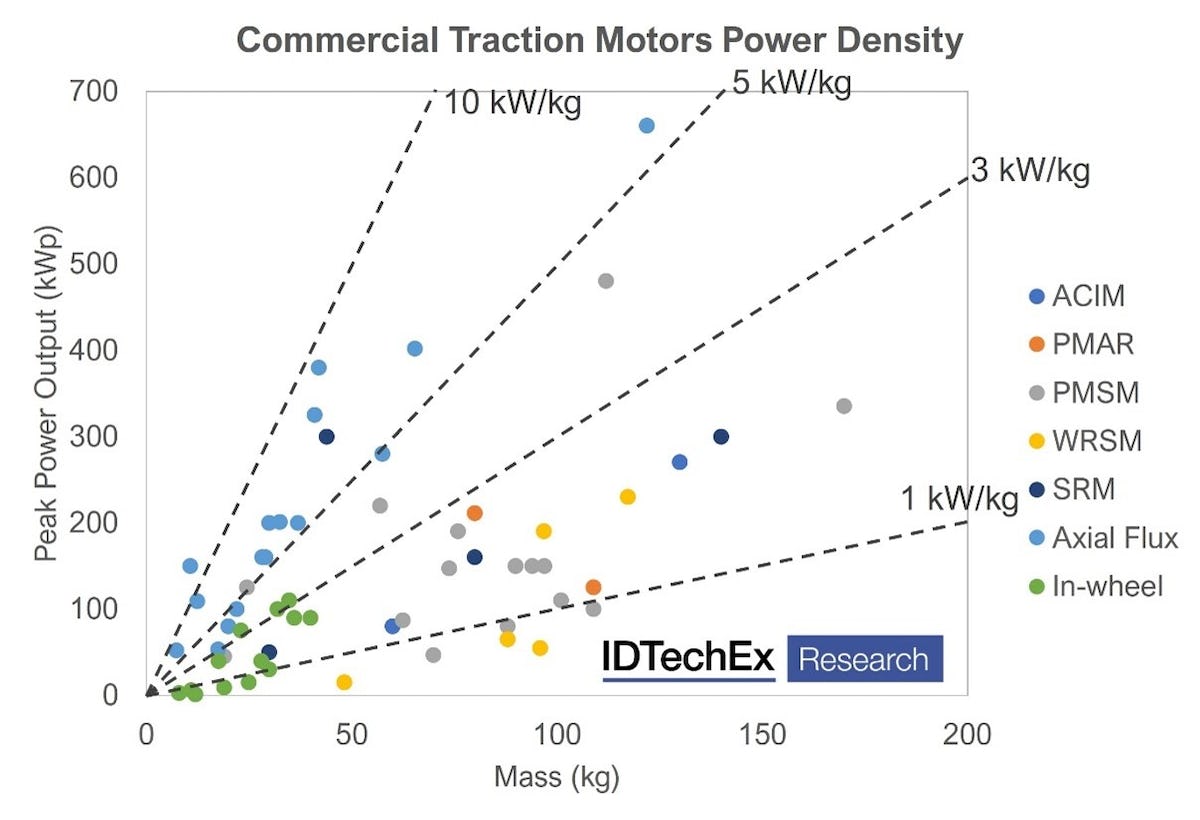 IDTechEx analyses key parameters of motors in BEVs and emerging alternatives. Source: Electric Vehicle Motors
Axial Flux and Other Emerging Options
A key emerging motor technology is that of axial flux. The magnetic flux is parallel to the axis of rotation in an axial flux motor (compared to perpendicular in radial flux machines). Whilst almost the entire EV market is using a form of radial flux motor, axial flux motors present several benefits. These include increased power and torque density and a pancake form factor ideal for integration in various scenarios. Despite the previous lack of adoption, the technology has evolved to the state where we have seen significant interest. Daimler acquired key players YASA to use their motors in the upcoming AMG electric platform and Renault has partnered with WHYLOT to use axial flux motors in their hybrids starting in 2025. The axial flux market in automotive EVs is very small today but IDTechEx expects a huge increase in demand over the next 10 years, with first applications in high-performance vehicles and certain hybrid applications. IDTechEx also sees some promising applications for other alternatives to typical EV motors such as in-wheel motors and switched reluctance motors. 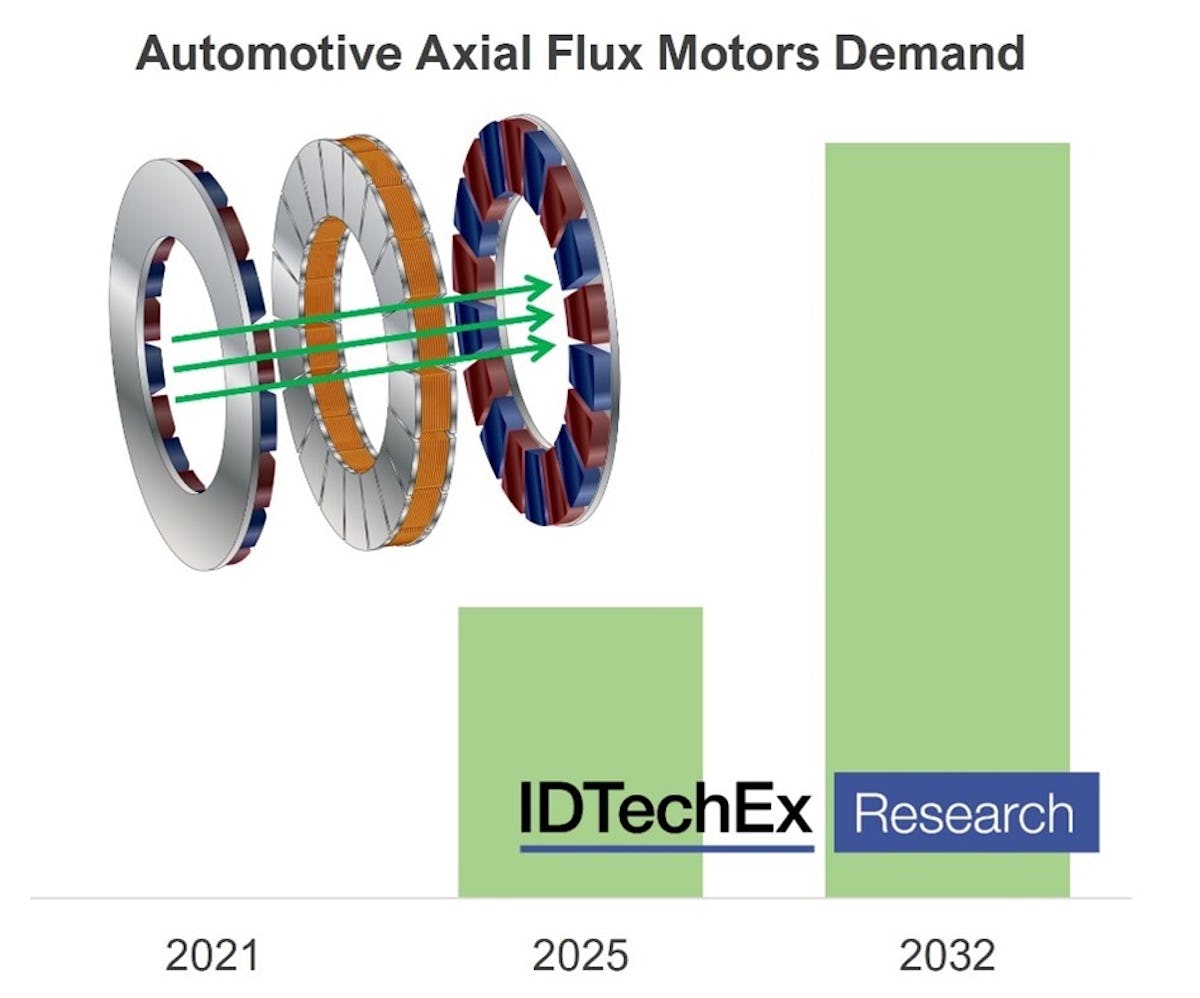 IDTechEx forecast a large increase in demand for automotive axial flux motors. Source: Electric Vehicle Motors
Materials and Rare-earths
A key consideration for the EV motor market is that of magnetic materials. From 2015-2020 the share of permanent magnet (PM) motors in the electric car market remained consistently above 75%. The magnets used in these motors are typically rich in rare-earths, mainly neodymium, but also often contain a series of heavy rare-earth such as dysprosium. These PM motors present excellent power density and efficiency. However, rare-earths have concerns around mining and waste in addition to a supply chain largely confined to China. In 2011, China restricted exports of these materials resulting in a massive price spike with prices reaching approximately 5 times that of the previous year. These factors combined resulted in several OEMs designing motors without rare-earths such as Renault’s wound rotor design in the Zoe and Audi’s induction motor in the e-tron. Whilst Renault were the main OEM using a wound rotor design, BMW has adopted similar for their 5th generation drive. However, the price of rare-earths has settled and remained fairly consistent and we have seen others switch to PM designs such as Tesla and Audi’s next-generation models. The price of neodymium has risen drastically again in the first half of 2021, once again creating uncertainty in this market. Despite these concerns, IDTechEx expects PM designs to remain the dominant form of electric motor going into the future albeit with a focus on rare-earth and especially heavy rare-earth reductions. 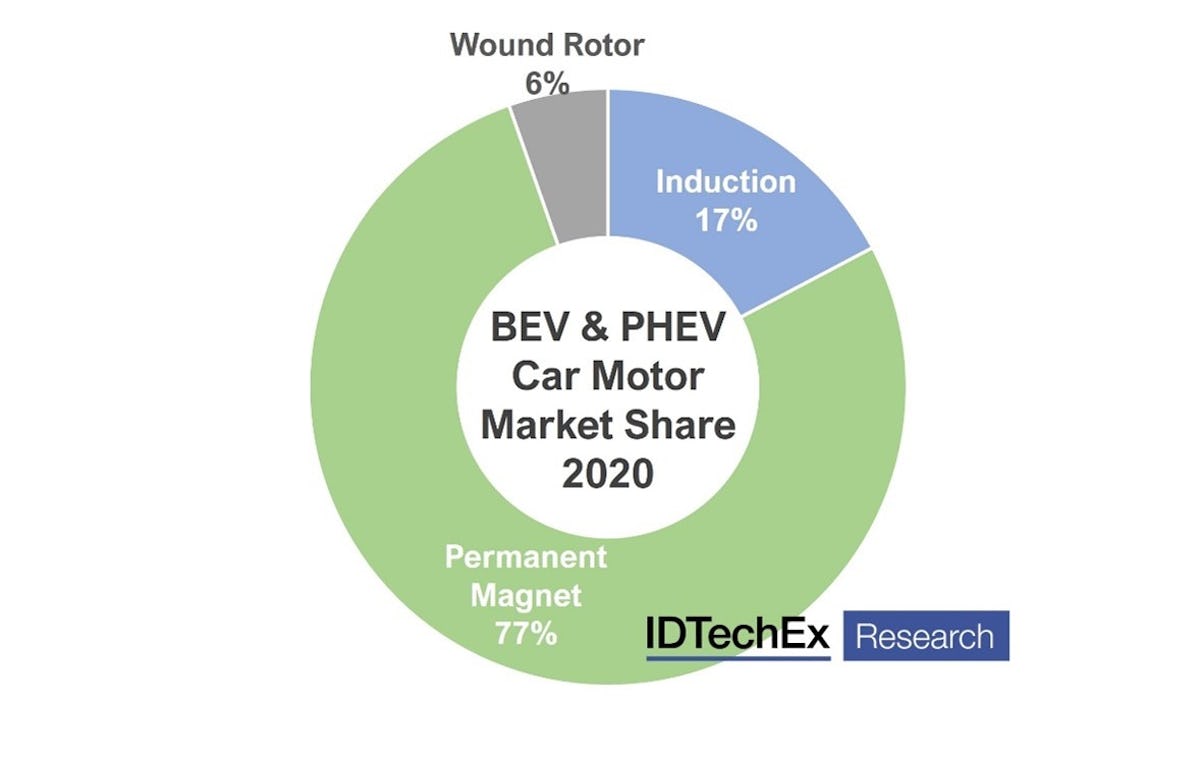