Of the total of 180 ferries that cross Norwegian fjords, it will be worthwhile to replace 84 of the ferries for battery operation and 43 ferries for hybrid operation. This corresponds to over 70 per cent of the Norwegian ferry fleet. This is the main conclusion of a recent study conducted by Siemens in collaboration with Bellona. 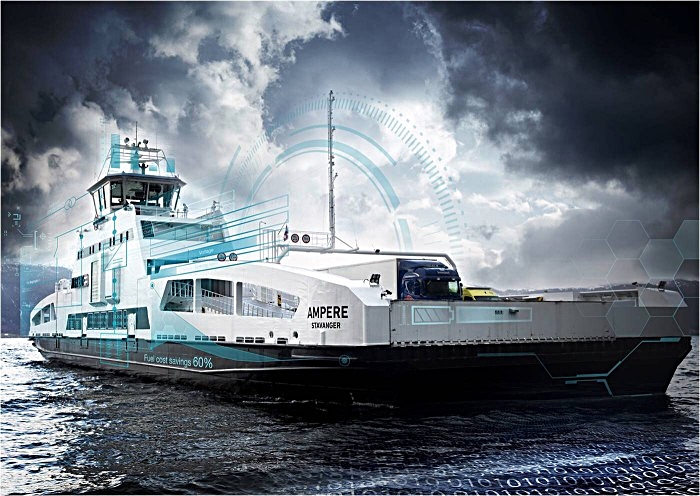 The study is based on the experiences of the electric ferry “Ampere”, which has used the electric solutions from Siemens. It is the operating experience from the world’s first battery ferry that has made it possible to provide answers to how many ferries in Norway it pays to switch to battery operation.

“Ampere” has since it came into operation in the winter of 2014-15, traveled a distance corresponding to halfway around the earth at the equator. The technology works, you just have to use it.

– “Ampere” has given us unique knowledge about profitability for battery ferries. If we compare this operating profile with other ferry routes in Norway, we see that electric operation shatters diesel ferries on profitability for seven out of ten ferries. That so many ferry routes are already proving suitable for electrification is very positive. Therefore, we should set ourselves high goals to quickly put in place the next battery ferries in Norway, says Odd Moen who is head of the marine division in Siemens.

Calculations show that a replacement of 84 ferries for battery operation will require additional investments of NOK 3.5 billion, partly as a result of strengthened electrical infrastructure, charging solutions and aluminum hulls on the ferries.

However, the potential for savings is great. Each year, these ferries will have reduced their operating costs by NOK 700 million. This means that the extra cost associated with electrification has been reimbursed in just five years. In the cost calculations, the current technology and solutions are taken into account.

In addition, the study shows that a transition to battery or hybrid operation on Norwegian ferries will provide major environmental benefits. Reduction in CO2 emissions is estimated at 300,000 tonnes. This corresponds to nine percent of the total emissions to domestic shipping. If one also performs the longest ferry routes as a plug-in hybrid, then the environmental savings will be significantly greater.

Norway’s climate goal is to reduce climate emissions by 40 per cent by 2030 compared with 1990, and the Storting decided this winter in its more concrete plan to achieve this goal that Norwegian ferry transport will be 100 per cent based on zero- or low-emission ferries by 2025.

– To achieve this goal, the restructuring must start now. These days, 10 new tenders are being issued for ferry routes with a total of 22 ferries. Of these, 20 can be electrified with battery operation. The technology exists, it is economically profitable and Norway has set clear goals. Then there is no alternative to continuing with environmentally hostile diesel ferries, says Frederic Hauge, general manager of Bellona.

The feasibility study is launched today at a separate event in connection with Arendalsuka.

Main findings from the report:

Of a total of 180 ferries, 84 ferries fit on 61 different ferry routes for battery operation
43 ferries on 32 ferry routes are suitable for hybrid ferries, which are operated in combination with batteries and diesel or gas-electric propulsion systems

Additional investment of a total of NOK 3.5 billion in, among other things, electrical infrastructure and aluminum hulls
Savings of 700 million annually