Researched in late 2016 with ongoing updates, this unique report on the Internet of Things IoT has over 140 data filled pages including over 150 images. It is intended to assist investors, participants and intending participants in the value chain including developers and academics, interested government officials and users seeking the truth based on new investigation. The focus is on identifying genuine capabilities and needs from a commercial point of view.

The pages are mostly in the form of easily assimilated infograms, roadmaps and forecasts. The report is about nodes that sense, learn, gather data and initiate reports and action using IP addressed sensor nodes to process and send information. It is realistic and analytical not evangelical. We do not repeat the mantra about tens of billions of nodes being deployed in only a few years. The many analysts sticking to such euphoria ignore the fact that, contrary to their expectation, very little IoT was deployed in 2016. They are “bubble pushing” with their forecasts, predicting ever steeper takeoff, now a physical impossibility.
However, our ongoing global travel, interviews, conferences and research by our multi-lingual PhD level analysts located across the world does lead us to believe that a large market will eventually emerge but not primarily for nodes, where our price sensitivity analysis and experimentation shows commoditisation rapidly arriving. Indeed, as Cisco correctly notes, it is a pre-requisite for success. The money will lie in the systems, software and support examined in this study, though we also look closely at node design to reveal all the impediments to progress as well as the things coming right and the potential for enhanced functionality and payback. For example, the ongoing major breaches of internet security with small connected devices sit awkwardly with system and software manufacturers’ claims year after year that they have cracked the problem.
The most primitive IoT nodes have an actuator and no sensor as with connected Raspberry Pi single board computers retrofitted to air conditioning for remote operation. We have talked to the CEO of Raspberry Pi, to systems and node suppliers, academics and many others and assessed their replies.
IoT centres around nodes collaborating for the benefit of humans without human intervention at the time. It does not include the Internet of People which is a renaming of the world of connected personal electronics operated by humans: this has completely different characteristics and it is cynical to conflate it with IoT, just as shovelling in RFID, all M2M, ZigBee and so on is unhelpful.
Nevertheless, we show how IoT nodes can be on people and quantify the appropriate part of wearables market because is relevant. The report explains further with a host of examples and options, even giving forecasts for agricultural robots following several respondents seeing agriculture as an important potential IoT market.
As IoT moves to higher volumes – billions rather than millions yearly – the nodes will typically not be hard wired: wireless nodes will have battery power and increasingly energy harvesting EH on-board because it will be impractical to change batteries. We consider the unsolved problem of suitable EH and the possibilities for solving it.
The largest potential applications will be multi-sensor so, for many reasons, component count will increase making cost reduction more difficult. We look at expenditure on IoT enabling technology which currently runs to billions of dollars yearly, mainly coming from governments and aspiring suppliers. However, we reveal how most of those reporting these and other IoT figures are puffing their data with things that may never be a part of the IoT scene such as sensor research in general.
Expenditure on buying and installing actual IoT networks is much more modest, contrary to heroic forecasts made by most analysts and manufacturers in the past. IDTechEx was disbelieving about the huge projections by others for the last four years and we have been proved right so far. Nevertheless, even our node forecasts have now been reduced in the light of what has happened, though our systems figures have been increased.

It adds up to $20 billion in actual networks including nodes in ten years from now and rapid progress after that. See the number and dollar breakdown by application. Learn which players do what. What are now looking to be the important IoT applications and why? What are the important open source options at node and system level? What has come right lately that will boost IoT and what is still problematic? These and many other questions are answered.

5G Tehnology
2019 marks the year for 5th-Generation Wireless Systems (5G) to come to life, with large scale 5G roll-out and more than thirty 5G devices rushing into the market, including 5G smartphones and customer-premises equipment (CPE). Not only will 5G accelerate the growth and expansion of telecommunications; but it will also redefine and accelerate industries such as automotive, entertainment, computing and manufacturing.

With high throughput and low latency, 5G is the most promising way to tackle the high-value areas including 3D robotic control, virtual reality monitoring and remote medical control. 5G is well-placed to solve problems that today’s technologies have not addressed yet. However, the enormous investment required to develop 5G and the uncertainty of the applications for 5G also put the future of 5G to the test. This report points out the unique niches for 5G and provides a holistic view of 5G technologies and vertical applications, which are essential to understanding the 5G market opportunity.
In this report, we provide an unbiased and complete view across different 5G segments including:
This report also includes a comprehensive survey of the coming user equipment including 5G smartphones and customer-premises equipment (CPE) and more than 20 key global players from infrastructure suppliers to telecommunication operators. It contains the most updated information from Mobile World Congress 2019, over 20 first-hand company interviews and 5G patent analysis by countries and companies. Based on the information, this report identifies and analyses the important trends in 5G in the following areas:

This report also includes a ten-year forecast for the 5G revenue and connection number based on five global regions (US, China, Korea & Japan, Europe and others), as well as the 5G base station deployment units. The 5G market is expected to be around $700 bn by 2030, with main contributions coming from mobile services, fixed wireless services and narrow-band IoT. 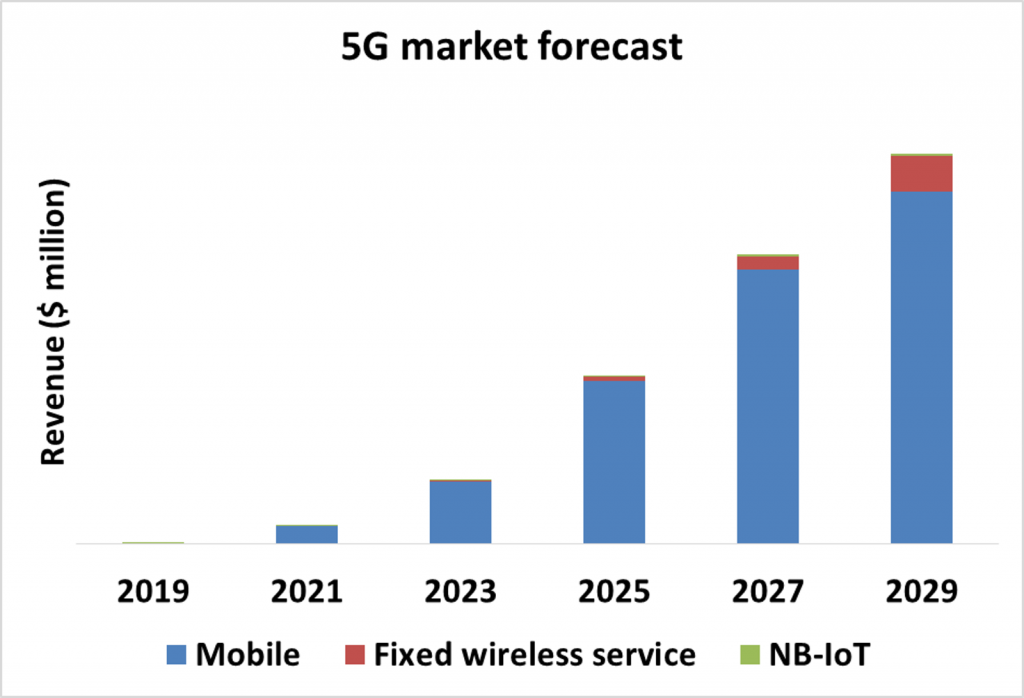