When it comes to nitrogen oxide (NOX) emissions, cruise ships are also of great concern despite the air pollution impact of the ongoing land-based “dieselgate” in Europe. In Denmark again, 107 cruise ships analysed emitted as much NOX in the Danish maritime economic exclusive zone (EEZ) as half the passenger cars operating in the country itself.

This report recommends a zero-emission berth standard for all European ports. In addition, extra stringent air pollution standards are recommended to apply to cruise ships. These ships usually operate close to the coast with long port calls at major tourist destinations, hence disproportionately affecting air quality. Initially, it is recommended to extend the emission control areas, currently in place in the North and Baltic Seas, to the rest of the EU seas and to tighten marine SECA standard in Europe to 10ppm, equivalent to fuel used in road transport. The report also suggests that cruise ships, the industry’s public-facing luxury segment, be looked up and targeted as first-movers in regulations to decarbonise the sector. So, in addition to a zero-emission berth standard, cruise ships should also be the first required to switch to zero emission propulsion in EU territorial waters. 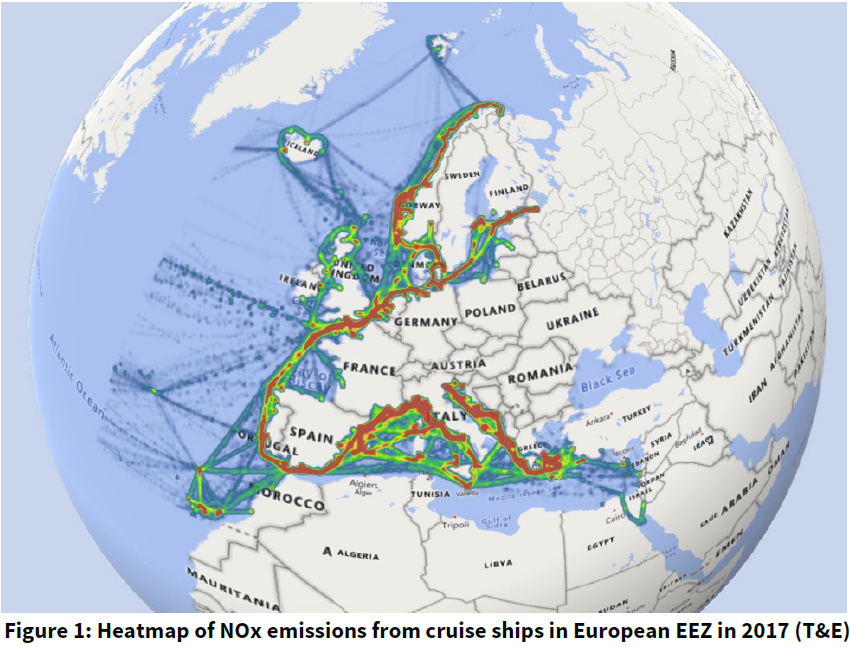 The study analysed 203 cruise ships that sailed according to ship automated identification system (AIS) in the EEZ of European countries in 2017. Operational data (incl. ship coordinates and speed) was obtained from ExactEarth which tracks ship movements using satellite data from AIS readings. The AIS data for the analysed ships had a nominal 1-hour interval between each data point.

We first allocated each data point to the EEZ and port cities (see Appendix I). We then used the methodology followed by the IMO 3rd GHG Study (2014)2, previous T&E reportsvi and the ICCT’s GHG inventoryvii to estimate the fuel consumption of each ship and associated emissions of air pollutants for each data point and summed them for respective country EEZs and ports.

In estimating emissions, we assumed that all the ships analysed complied with the relevant fuel sulphur standards in place in each geographical area. Notably, ships sailing in SECAs are required to use only 0.1% sulphur compatible marine gas oils (MGO)3, while cruise ships sailing outside SECA are obliged to use residual fuels complying to a maximum 1.5% marine sulphur cap mandated under the EU Sulphur Directive (2012/33/EU) (Figure 2).

The Sulphur Directive requires ships, including cruise ships to switch to 0.1% sulphur compatible fuels if they spend more than 2 hours at berth. Given that cruise ships normally spend far more 2 hours at berth during cruise port calls, we have assumed that all the cruise ships analysed complied with the 0.1% fuel standard during (the entire duration of) all port calls.
According to both global MARPOL Annex VI and EU Sulphur Directive, cruise ships will be required to switch to fuels with a maximum of 0.5% Sulphur content starting from 1 January 2020 when sailing outside SECAs, when operating outside the berths.

This standard will remain less stringent compared to EU berth Sulphur standard (0.1%) in all European ports.4 To take into account the new standard we also modelled an additional forward-looking scenario, the results of which are presented in Appendix 3.

This report provides conservative estimates for shipping, both for absolute cruise emissions and for the comparisons with passenger cars (light duty vehicles – LDVs5). Our analysis assumes that ships fully comply with the existing SOX and NOX standards in place in the relevant geographical locations. This has been shown not to be always the case with some ships being found to violate the standards including some cruise ships.viii On the other hand, the “dieselgate” scandal has unearthed ample evidence of consistent cheating by car manufacturers of emission standards using defeat devices.

This masks the fact that real world passenger vehicle emissions exceed standards by a considerable degree. For this reason, we have based vehicle emission levels, for comparison with cruise ships, on verified real-world emission factors, which have been shown to be several times higher than legal limits. Furthermore, the European passenger car fleet is assumed for this study to be exclusively composed of diesel cars, which have better CO2 but a worse NOX performance compared to petrol cars. As the comparisons rely on the ship emissions being divided by those of the passenger cars, the final results are therefore likely to be on the conservative i.e. they may well underestimate the comparative extent of air pollution from cruise ships versus cars.

General findings for Europe
The report found that in 2017, 203 cruise ships in Europe emitted about 62 kt of SOX, 155 kt of NOX, 10 kt of PM and more than 10 Mt of CO2 (table 1). Most of these emissions (especially SOX) took place in the Mediterranean Sea and other major touristic destinations, but also along the coasts of the key member states where cruise ships depart from/terminate at or operate around. (Figures 1 and 3). CO2 emissions from the 203 analysed ships alone (covering only the sailing time in European EEZs) are on par with total national GHG emissions of Latvia, Luxembourg and Cyprus, but twice as big as the total national GHGix emissions of Malta.

The full report can be read here: PDF