Norway establishes the world’s most efficient and environmentally friendly shipping.

Norway has committed itself to reducing greenhouse gas emissions by 40 percent by 2030 – a huge challenge.

If Norwegian domestic shipping is to take its share of the reduction, we need to multiply the rate of introducing environmentally friendly fuels and alternative propulsion technology. Furthermore, IMO has decided that emissions shall be halved by 2050. This means that the international markets for green technologies and solutions will soon be a reality.

The Green Shipping Programme aims to find scalable solutions for efficient and environmentally friendly shipping. The results will be cost-effective emission cuts, economic growth, increased competitiveness, and new jobs in Norway. Both authorities and industry actors participate in the programme and are working together to achieve these goals.

The studies and pilots in the Green Shipping Programme are crucial for the phasing in of zero and low-emission solutions in shipping towards 2030, with significant climate, environmental and public health benefits. Down below can be seen a few of pilot programs.

INITIATED PILOTS – FIRST IN THE WORLD 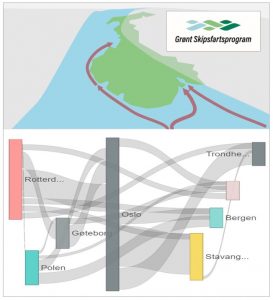 transport’s premises with most goods transported from Europe passing through Eastern Norway, independent of final destination. A new national logistics – and terminal structure, that facilitates transition from truck transport via Eastern Norway to direct maritime transport to the entire country, is more sustainable. Direct maritime transport both ways between Europe and the West, and between Europe and the East of Norway, will reduce costs and GHG emissions and improve the cargo flow balance.

Consequently, the goal of the study is to develop a knowledge base and plan that can help realize this sustainable logistics and terminal structure. At the end of the project, customers will be able to test a new sea-based logistics structure between Norway and Europe. The test will be realized over the course of 3-4 years, followed by large scale implementation resulting in significant cargo transfer from road to sea in 5-10 years.

Status: The project was launched in March 2019 and is in the closing stages of mapping cargo volumes and trade patterns between Norway and Europe. Phone interviews with approximately 50 companies in addition to 20 in-depth interviews have been conducted. The results will be used to identify and evaluate national customer volumes that are suited for direct sea-based distribution to Norway from central warehouses or consolidation terminals in Europe in combination with export cargo. Further project work includes mapping of current transport offering and sketching a proposed sea-based logistics structure for 2030.

Through this pilot HeidelbergCement and Felleskjøpet Agri want to evaluate the feasibility of combining two cargo owners’ logistics between the east and the west of Norway, under the hypothesis that the total goods flow combined with long-term chartering contracts can make it possible to realize a zero-emission bulk carrier.

Status: The pilot was initiated in March 2019. Analyses of historical shipments have revealed a significant potential for coordination and co-utilization of vessels. A requirements specification for the logistics solution with zero emission ships is under development. Possible zero-emission solutions, green contract regimes and cost-benefit analysis are being evaluated.

One Corporation to Pollute Them All

The main purpose of this study is to analyse air pollution caused by luxury passenger cruise ships in European waters. The results show that the luxury cruise brands owned by Carnival Corporation & PLC emitted in 2017 in European seas alone 10 times more disease-causing sulphur oxide than all of Europe’s 260+ million passenger vehicles. Spain, Italy, Greece, France and Norway are the most exposed countries to cruise ship air pollution in Europe. Among the major cruise ports, Barcelona, Palma Mallorca and Venice are the most polluted. 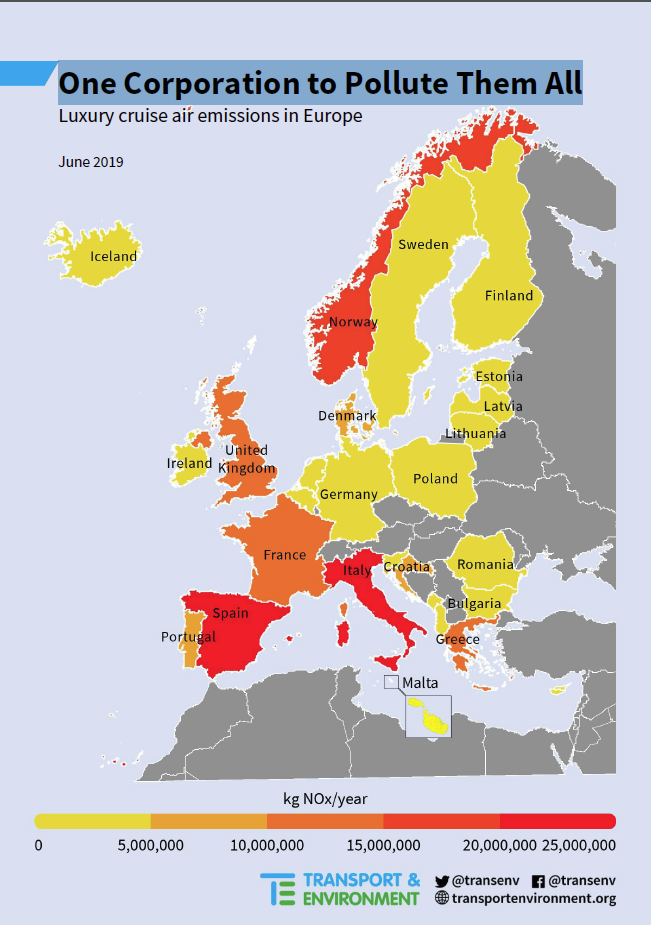 This study was updated following feedback from several ports after publication. Update includes the addition of up to 15 new ports in the section 3.3 and Appendix 2. For consistency purposes, we maintained other ports from the earlier list. We are grateful to stakeholders who reached out to us with valuable feedback, which helped us in updating the report.

1. Description of the policy context
Shipping is an important transport sector relying on the use of fossil fuels as a source of energy. Unlike other transport modes, marine fuel is less refined and standards for emission of air pollutants are less strict. As a result, shipping is a source of considerable air pollution despite fewer number of operational vessels in the global fleet.

Sulphur oxide (SOX) emissions form sulphate (SO4) aerosols that increase human health risks. SOX, fine particles (PM2.5) and nitrogen oxides (NOX) cause premature death, including from lung cancer and cardiovascular disease, and morbidity, e.g., childhood asthma. They also contribute to acidification in terrestrial and aquatic environments.i NOX contribute to particle and ozone formation, in addition to causing acidification and eutrophication upon deposition on land, lakes and seas. It is moved long distances in air and is, therefore, often considered a ‘regional’ pollutant.ii
Over the past 10 years, governments acting locally, regionally and globally have commended efforts to reduce ship air pollution by setting SOX and NOX standards for marine fuels and engines.

In addition, certain geographical areas in Europe and North America, and more recently in China (only local) have been designated emission control areas (ECA) for air pollutants.
Yet, shipping remains the least regulated transport sector as regards air pollution. The best marine sulphur standard (0.1% | 1000 ppm) remains 100 times worse than Europe’s sulphur standard for road diesel/petrol (0.001% | 10 ppm) in place for the past 15 years. Recent studies have shown the staggering amount of air pollutants emitted by the global fleetiii and that increasingly large proportion of NOX and SOX depositions on land in coastal regions and port cities come from ships.iv But these studies have had a generic global and/or regional scope.